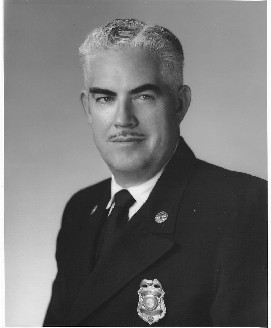 The City of Downey assumed the responsibility of providing fire protection services for the citizens of Downey from the Los Angeles County Fire Department at noon on Tuesday, September 10, 1957. Since that time, the Downey Fire Department has strived to serve and protect the lives and property of the community through the delivery of the highest standards of emergency medical care, fire prevention, and fire and environmental protection.

Chief Robert Gain took the helm of the fire department as its first Chief on June 16, 1957. He, along with 53 dedicated individuals were to form the foundation of this great department. Chief Gain faced a monumental task of literally building a Fire Department from the ground up as he had to locate and purchase land for fire stations, purchase fire engines and equipment, and hire and train an entire department. His great planning and foresight helped to develop a modern and professional Fire Department the citizens of Downey enjoy today. However, Chief Gain’s contributions were not only limited to the Downey community. He is also known as the “Father of the Fire Code” for his leadership in the development of the Uniform Fire Code, which would become a minimum set of fire prevention standards to safeguard life, property, and public welfare. 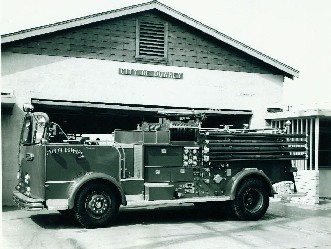 Downey’s first Fire Station was located at 11435 Downey Avenue. This station, originally a Los Angeles County Fire Department station, would serve as the Department's Headquarters station for 17 years until a new Fire Station #1 was placed into operation in September of 1974 at 12222 Paramount Blvd. Stations #2 and Station #3 were in the construction phase when Downey took over fire services and they would not be complete until January of 1958. In the interim, Trinity Baptist Church located at Florence and Downey Avenues would serve as Fire Station #3 and the Southern California Gas Company located on Washburn Road would serve as Fire Station #2. Today, Fire Station # 2 at 9556 Imperial Highway and Fire Station # 3 located at 9900 Paramount Boulevard are in operation, and celebrated their 52nd year of service as of January of 2010. Fire Station #4, located at 9349 Florence Avenue, was dedicated on November 17, 1959 and is also service today. The 4 fire stations now serving the City, as compared to only the one station when fire services were provided by L.A. County Fire, enhanced the level of service provided to the community. February of 1962, saw the completion of a Drill Tower at 12354 Bellflower Blvd. It continues to be utilized today as a centralized training center for Downey Firefighters. 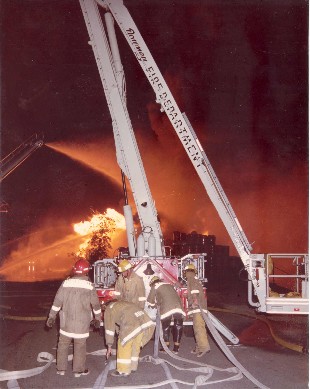 Downey Fire initially utilized fire apparatus on loan from the cities of Burbank, Huntington Park, Santa Ana, South Gate and Vernon until four Crown triple combination pumpers were purchased and placed into service on December 1, 1957. In 1962, the City purchased its first aerial ladder truck. This was a 1962 Crown with an 85’ Pitman ladder. This remained in service until 1983, when the City purchased a 100’ Mack tillered aerial ladder. The Mack aerial served the Fire Department until is was taken out-of-service and replaced with a Pierce 100’ tillered aerial ladder in 2005.

In the late 50’s and early 60’s, Rancho Los Amigos Hospital was to become one of the largest employers in the City of Downey. Following the facility's accreditation in 1959 as an orthopedic rehabilitation center, it would come to house thousands of patients. It was decided to place and additional fire station to cover the south west portion of the city. On July 1, 1963 on leased land for $1 per month for a period of 50 years Fire Station #5 was dedicated. This station was to remain in service until the relocation of Fire Station #1 to Paramount Blvd in 1974.

The 1970’s saw dramatic changes to the Fire Service as well as the Downey Fire Department. Chief Gain retired on November 4, 1972 handing the reigns over to Chief Don Warren who served for a period of 9 months. Chief Warren served as Chief Gain’s Assistant Chief and was instrumental in assisting Chief Gain with the building of the Downey Fire Department. On July 1, 1973 Battalion Chief Edwin Wood was promoted to Fire Chief. Chief Wood would oversee the addition of Paramedic services in Downey beginning in November of 1974 with the addition of a paramedic squad to Fire Station #1. 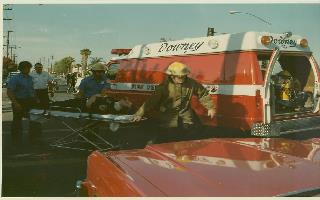 Chief Wood would retire in July of 1978 with Chief Don Davis assuming command of the Department until his promotion to City Manager in December 1985. Another major development occurred in the 1970’s with the addition of the Joint Powers Communication Center (JPCC). The center, completed in February of 1976 with participating agreements from local cities, was to serve as a regional fire communication center effectively sharing and managing fire and medical resources. Today, the JPCC provides fire communications and dispatch services to the Cities of Compton, Downey, and Santa Fe Springs; handling a combined population of over 300,000 people covering an area of 40 square miles. The center handled 47,171 total calls in 2009 – a significant increase from the original 363 calls in 1957-1958. 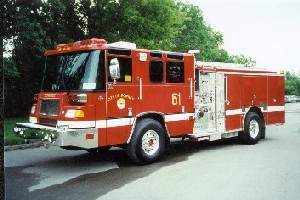 The 1980’s also brought new disciplines to the fire service. Hazardous materials incidents were on the increase and the fire service had to adapt to respond to these types of incidents. Training on this issue was extensive and new equipment was purchased to assist our firefighters with this new challenge. In June of 1985, a second paramedic squad was put into service at Fire Station #4 serving the residents of the northern portion of the City. In December of 1985, Chief Ron Irwin was promoted to lead the Department and would do so for the next 15 years retiring in January of 2000.

The new millennium also brought about much change in the fire service with the September 11, 2001 terrorist attacks in New York City and Washington DC. The increase in incidents of terrorism, both abroad and domestically, increased the need for first responders to be properly equipped and trained. The Downey Fire Department trained and equipped itself to respond to incidents involving chemical, nuclear, biological, and radiological (CNBR) threats. Mark Sauter was named as Downey’s 6th Fire Chief in January of 2000; and during his tenure, oversaw the purchases of modern fire apparatus including 2 new Pierce pumpers, a Pierce tractor drawn aerial ladder truck, a Pierce technical rescue unit, and a new command vehicle. 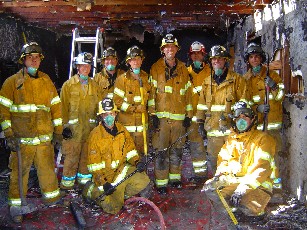 Jeff Turner served as Fire Chief from 2008 through 2010, until Lonnie Croom was sworn in as Downey's eighth Fire Chief. During his three and one half years, the department's ambulance operators became fire department employees and was challenged with economic recession issues.