Chief Dean Milligan began his career with the Downey Police Department in 1994. After graduating from the Los Angeles County Sheriff’s Academy, he was assigned to the Field Operations Division, where he also worked as a Field Training Officer and an Accident Investigator.

He was promoted to the rank of Sergeant in January 2000, where he worked as a Patrol Supervisor, while also overseeing the department’s Mounted unit. In 2005 he was assigned to Special Operations, where he supervised the traffic unit.

In May 2009 he was promoted the rank of Lieutenant, where he worked as a Patrol Watch Commander until being transferred into the Administrative Division in May 2010, where he supervised the Professional Standards Unit. In February 2012, he was transferred to the Detective Division, where he was assigned until his promotion to Captain in December 2012. Dean oversaw both the Investigative and Administrative divisions until January of 2016, when he was transferred to the Field Operations division, where he served as the Commanding Officer until December 5, 2019, when he was sworn in as the City of Downey’s 11th Chief of Police.

Dean received his Bachelor’s degree in Political Science from the University of La Verne and his Master’s degree in Leadership from the University of San Diego. He is also a graduate of the Sherman Block Leadership Institute. Dean and his wife, Teresa, together have four adult children. He enjoys spending time with his family, traveling and golfing with his wife whenever the opportunity allows. 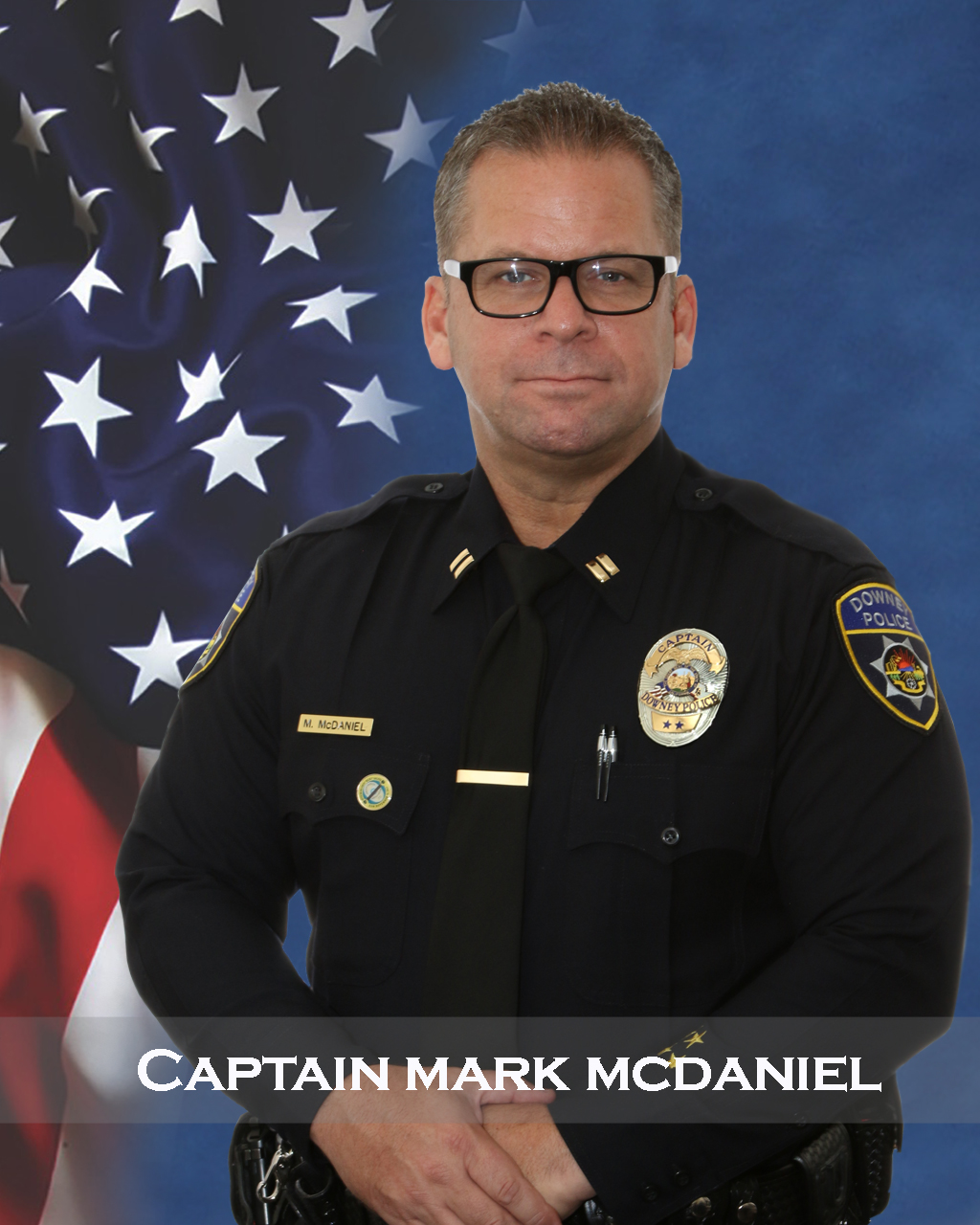 Captain Mark McDaniel began his career with the Downey Police Department in 1990 as a Police Aide. Mark attended the Los Angeles County Sheriff’s Academy and graduated as a Downey Police Officer in 1991. He was promoted to the rank of Captain on May 7, 2018.

Captain McDaniel has served as a Police Officer, Field Training Officer, Police Corporal, and Patrol Supervisor. He has also worked as a Detective in the Gang Unit and in the Special Enforcement Team (SET) assisting with the recruitment and background investigations of all police department employees. Captain McDaniel also served as the Administrative Sergeant before being promoted to Lieutenant. He has served as a Patrol Watch Commander and Detective Bureau Lieutenant, where he served as the Department’s Public Information Officer.

Captain McDaniel is currently the Commanding Officer of both the Detective Bureau and Administration Division.

Captain McDaniel was born in the city of Downey and was raised in Cerritos. He is a graduate of Cerritos High School. Mark has a bachelor’s degree in Occupational Studies from California State University, Long Beach and holds a master’s degree in Emergency Services Administration. Captain McDaniel is also a graduate of the Sherman Block Supervisory Leadership Institute and the Los Angeles Police Department Leadership Program.

Mark enjoys spending time with his family, camping and fishing, and is an avid Dallas Cowboys and UCLA Bruins football fan. 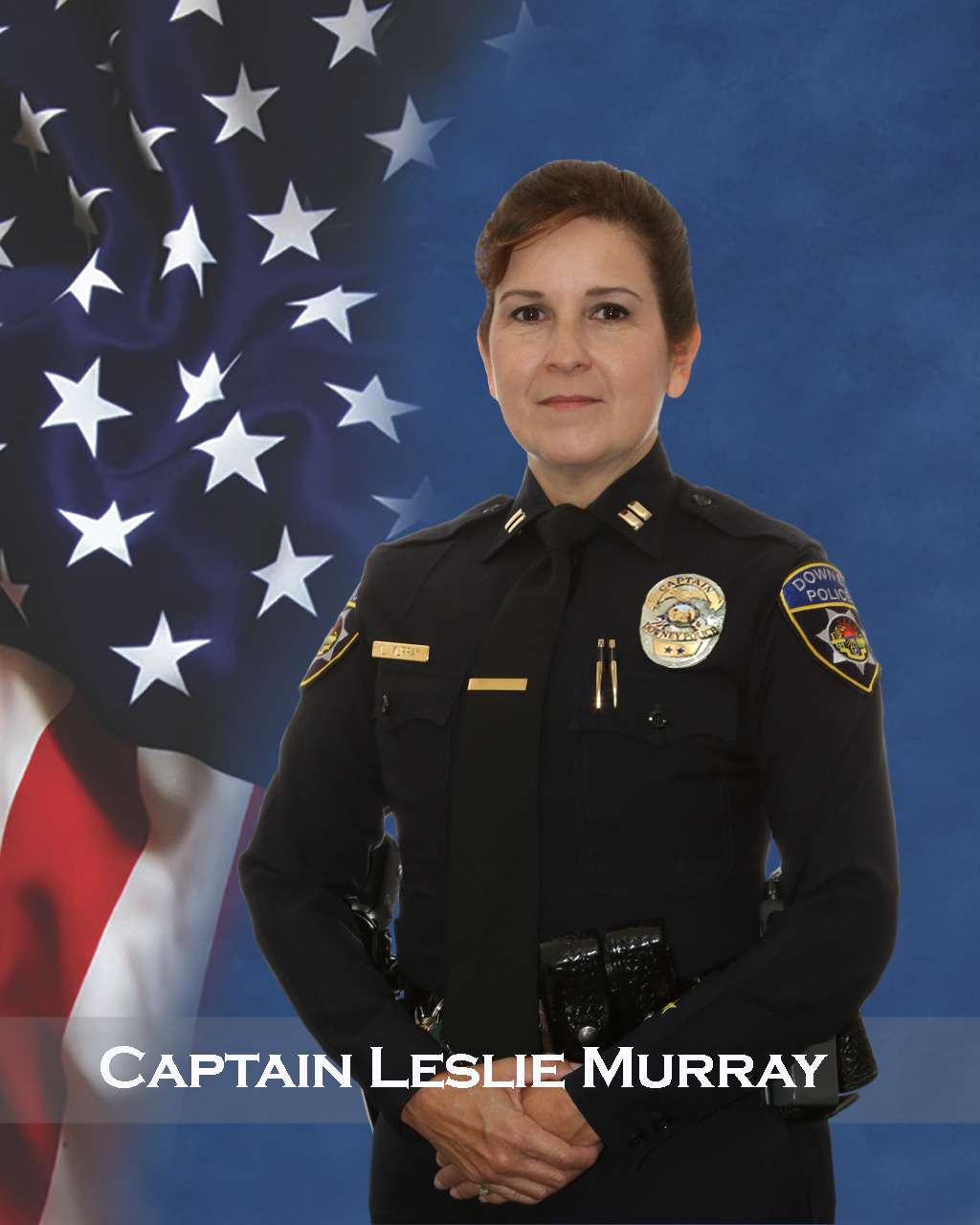 Captain Leslie Murray began her career with the Downey Police Department in August 1990 when she was hired as a police officer recruit. She attended the Los Angeles County Sheriff’s Department Academy and after graduating, worked as a patrol officer. During her tenure, Leslie also worked as a Sexual Assault and Child Abuse Investigator and the department’s Training Coordinator and Community Relations Officer. In January 2000, she promoted to Sergeant and was assigned to Field Operations and in 2005, she took over the supervision of the Property Crimes section of the Detective Division.

During her time with the department, Leslie has had oversight of the department’s Field Training Program, Jail Operations, School Resource Program, Homeless Outreach Team, and Honor Guard. She also developed and has managed the department’s Crime Impact Team and Peer Support Program.

Leslie is a graduate of the Sherman Block Leadership Institute and the LAPD Leadership Program. She received her Bachelor’s degree in Sociology and her Master’s degree in Public Administration from California State University at Long Beach.

Leslie has been married to her husband Daniel for twenty-seven years. Together, they have four children. Leslie enjoys cooking, traveling and spending time with her family. 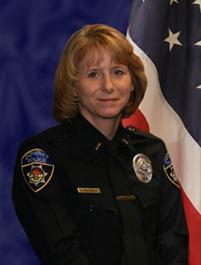 Lieutenant Kathleen Mendoza began her career with the Downey Police Department in 1991 after graduating from the Los Angeles County Sheriff’s Academy. In December 2000, Kathleen promoted to the rank of Sergeant, and in November 2009 to the rank of Lieutenant.

During her career Kathleen has served in a variety of assignments, including Field Operations, Administration and in the Detective Bureau investigating sexual assaults and crimes involving children. As a Sergeant in Patrol, Kathleen also supervised our Force Training Unit. In 2006, Kathleen was assigned to our Professional Standards Unit, overseeing Department training and conducting personnel investigations.

In November 2009, Kathleen promoted to Lieutenant and returned to Field Operations as a Watch Commander. Kathleen also oversees our Dispatch Center, Driver’s Training, and our Crime Impact Team. Kathleen is also a graduate of the Sherman Block Supervisory Leadership Institute.

Kathleen is a graduate of California State University Long Beach. Kathleen enjoys running and hockey and is an avid baseball fan. 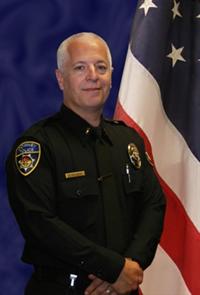 Lieutenant Alex Irizabal began his career in law enforcement in 1996 with the Hawthorne Police Department. He has been with the City of Downey Police Department since 1998. He has a Bachelor’s degree in Criminal Justice and holds a Master's degree in Public Administration from California State University, Northridge. Additionally, Alex is a graduate of the Sherman Block Supervisory Leadership Institute.

While assigned to patrol, Alex was selected to be part of the new School Resource Officer program in partnership with the Downey Unified School District. In addition to working patrol, Alex has worked as a Gang and Narcotics detective.

In 2008, Alex was transferred to the Detective Bureau where he supervised the Robbery/Homicide unit. Alex was responsible for developing the department’s entry training program, specially designed to provide advance tactics and training to the detective bureau entry team.

Alex was promoted to the rank of Lieutenant in 2012 and is currently a Watch Commander assigned to the patrol division. He has assumed responsibility for several areas of the department. Alex currently oversees the department’s Jail Operations as well as the Special Response Team. Alex has recently completed the P.O.S.T. Management Course. 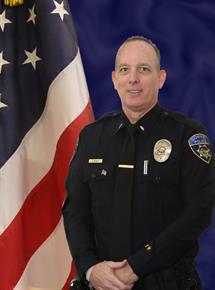 Over the next seven years, Brian was assigned as a patrol officer in the Field Operations Division. During that time he promoted to the rank of Corporal and was chosen as a Field Training Officer.

In July, 2012, Brian was transferred to Administration. During this assignment, he handled personnel investigations and departmental training; and also supervised two investigators responsible for the department’s background investigations and the issuing of special event permits. In December, 2012, Brian was promoted to the rank of Lieutenant and assigned to patrol as a Watch Commander. Currently he is assigned to Administration and oversees Professional Standards, Training, the department’s S.E.T. Team, Neighborhood Watch, Records Bureau, along with the Chaplain and Volunteer programs. 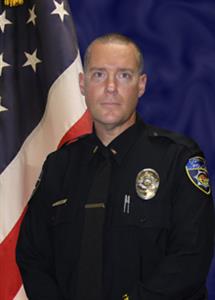 Lieutenant Scott Loughner began his law enforcement career with the Downey Police Department in August of 1999 when he was hired as a Police Recruit. Scott completed the Orange County Sheriff’s Academy and was sworn in as a Police Officer in February of 2000.

Scott was assigned to Field Operations where he worked Patrol. Scott became a Field Training Officer and worked several collateral duties including: School Resource Officer, Explorer Advisor, member of the Special Response Team and member of the Neighborhood Preservation Team.

Scott was assigned to Field Operations where he worked as a field supervisor for Patrol. Collateral assignments that Scott supervised as a Patrol Sergeant included: Scheduling Coordinator, Field Training Program and Special Response Team.

In December of 2012, Scott was selected as the Special Operations Sergeant, where his duties included overseeing the Traffic Detail, Parking Enforcement, Police Aides, Community Service Officers and Honor Guard Detail. Scott remained in this position until March of 2013, when he was promoted to the rank of Lieutenant. Scott serves as the Watch Commander on Patrol and oversees the Canine Team.

Prior to becoming a police officer, Scott obtained his Bachelors of Science degree in Criminal Justice from California State University, Fullerton, with a minor in Business Administration. Scott has continued his education and completed his Master of Science degree in Emergency Services Administration from California State University, Long Beach. Scott is also a graduate of the Sherman Block Supervisory Leadership Institute.

Lieutenant David Zimmerman began his law enforcement career with the Downey Police Department in September of 1993 when he was hired as a Police Recruit. David graduated the Rio Hondo Police Academy and was sworn in as a Police Officer in February of 1994.

David was initially assigned to Field Operations where he worked Patrol. David became a Field Training Officer and a Corporal before being selected to the Motorcycle detail. David worked as a Motor Officer for two years before he was assigned to the Detective Bureau as a Narcotic Detective. David spent a total of six years as a Narcotic Detective with extended assignments to LA IMAPCT and DEA’s Southwest Border Initiative Task Force. As an officer and detective David was assigned several collateral duties including: Firearms instructor, Defensive Tactics Instructor, Explorer Advisor, Honor Guard, Special Response Team, and Neighborhood Preservation Team.

David was promoted to Sergeant in May of 2009 and was assigned to Field Operations where he worked as a field supervisor for Patrol. David’s collateral assignments as a Patrol Sergeant included his continued involvement as a Firearms Instructor and Defensive Tactics Instructor. David also supervised the Crime Impart Team.

In 2011 David was selected to the Detective Bureau as the Sergeant overseeing Narcotics and Vice. During his tenure David was also tasked with supervising our Gang Unit. From 2013 to 2017 David was assigned to LA IMPACT as a Group Supervisor for Group 21. During his tenure as a Group Supervisor at LAI David’s Group was involved in several major joint investigations involving several Federal Law Enforcement agencies. At the culmination of their largest investigation (Operation Cash Cow) a joint takedown was conducted at several businesses and suspected stash houses. At the conclusion of the day approximately $90 million dollars in cash and another $40 million in assets were seized. At the time it was the largest one day cash seizure in US History. David’s team was subsequently flown to Washington DC where they received an award from DEA for their efforts.

In December of 2018, David was promoted to Lieutenant were he currently serves as the Watch Commander on Patrol and oversees Special Operations and the Department’s Homeless Outreach Detail.

Prior to becoming a police officer, David Spent 4 years in the Marine Corps. The highlight of his career was being an Infantry Squad leader during Desert Shield/Desert Storm. David obtained his Bachelors of Science degree in Business Management from the University of Phoenix. David is also a graduate of the Sherman Block Supervisory Leadership Institute. David and his wife Lisa have 3 children together and their free time is usually spent shuttling them to their practice or games.